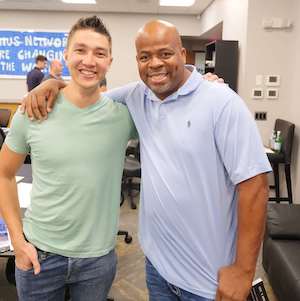 But while he was in solitary confinement, Andre had an epiphany.

After a lot of hard work, he was released having served just 14 years…. with a goal to become a Harvard fellow.

Not ONLY did Andre achieve that goal… but he’s also lectured on multiple TEDx stages, as well as at Harvard University and London Business School.

He’s on a mission to fix America’s criminal justice system.

In this episode of the 7-Figure Millennials podcast, you’ll learn:

… and SO much more.
Please enjoy this crazy and inspiring story with Andre Norman.

Find Out More About Andre Norman

Want To Find Out How YOU Can Connect With People Like Andre To Grow Your Business?

The 3-Step Connection Method I Used To Go From "No Name" → Befriending
7-9+ Figure Entrepreneurs, NYT Bestselling Authors, and TED Speakers...

Where Should I Send It? 👇