Joel Weldon: The Secrets to Becoming a Hall of Fame Professional Speaker

Joel Weldon is an entrepreneur and Hall of Fame professional speaker with over 3,000 paid talks under his belt. He has also coached and critiqued well over 10,000 speakers throughout his career. At the age of 79, he continues to live a healthy, happy, and active life. 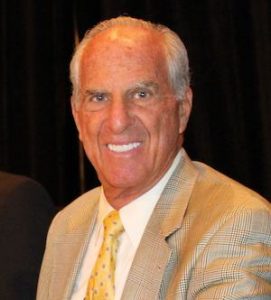 Joel Weldon is a shining example of the 7-Figure Millennials mission. “At 79,” he says, “I’m still working full-time with no plans to ever stop.”

He cautions young entrepreneurs to focus on having a balanced life.

Joel is a big believer in a healthy lifestyle. He works out three days a week and follows a very healthy diet. He is a success in every area of his life!

But at the age of 26, Joel was earning just $62.50 a week as a carpenter in the construction industry in New York. He was married, with a baby on the way, and clueless about money.

While slogging away as a carpenter and earning minimum wage, a friend from church offered Joel the chance to become a salesman and work for commission. Despite being painfully shy, Joel decided to give it a shot.

But success didn’t come easy, especially for a shy, inexperienced salesman like Joel. After four months, he had made 1 200 sales calls and closed just one sale. His boss called him the worst salesman he had met in 22 years.

He told Joel he would never make it dealing with people unless he changed the way he thought.

Those were some of the most powerful words Joel had ever heard. And words millennial entrepreneurs should take to heart.

Joel’s boss introduced him to Earl Nightingale’s The Strangest Secret, the largest-selling spoken word record of the 1960s.

He was just called the worst salesman in the world, and his boss’s solution was listening to a record? Joel thought this was the dumbest thing he has ever heard.

But he gave it a chance and admitted that it was like a light came on in a darkened room.

The message was simple: You become what you think about most of the time.

Joel and his wife Judy listened to The Strangest Secret for a solid week. He realized he needed to change his mindset from what he couldn’t do to what he could do.

The next day, he made two sales in four hours.

Joel says that was the day his life changed. There was a switch from negative to positive. From failure to success.

By the end of that year, Joel was the number one salesperson among 1,100 at the company, in spite of the first four months of selling nothing. Joel was on fire.

Don’t Forget Who Your Biggest Supporters Are

Throughout this process, and until today, his wife remained his biggest supporter.

And secondly, having the same values. He says opposites may attract at first, but he doesn’t see that you can build a solid relationship on that.

Joel actually met and became friends with Earl Nightingale. Earl was one of the most listened-to voices in America between the 50s and the 70s. He had the largest syndicated radio show in the country. Joel wanted to show Earl appreciation for changing his life.

So, he wrote him a thank-you note, and he responded.

Soon, a friendship blossomed between the two, and Joel and Earl started taking fishing trips together. It was during one of these trips that Earl asked Joel a question out of the blue.

“Do you know how much money you’re going to earn for the rest of your life?”

The answer, he explained, is simple and based on three things: need, ability, and replacement.

By realizing your value, you can become a 7-figure entrepreneur. The more invaluable you are, the more money you can make, as long as there is a need for what you do and you are good at doing it.

It’s as simple as that.

That’s why the football quarterback Tom Brady makes $20 million a year. No-one else can do what he does.

The System that Saves Entrepreneurs Stress, Time, Energy, and Money

Joel’s next life-changing lesson happened in 1969. After giving a presentation, someone approached Joel and called him “the worst speaker I have ever heard”.

He pointed Joel to Toastmasters to learn the art of speaking. Five years after joining the club, Joel went all the way to its world speech finals. He spoke in front of 2,000 people and was placed in the top three in the world out of 60,000 competitors.

Joel gave 274 speeches that year and decided to become a professional speaker.

He also helped found the National Speakers Association, of which he is still an active member. 51 years later, Joel still attends Toastmasters in Scottsdale every Monday at noon.

There are three core values that the system is built on:

It’s called a system, explains Joel, because “ultimately, a SYSTEM aims to Save You Stress, Time, Energy, and Money. And that’s what the Ultimate Speaking System does.”

Joel’s system is a set of tools that breaks down the entire process of public speaking, from the introduction or opening to the closing and the call to action. It teaches about using visuals, adding humor, and telling stories.

The system can help entrepreneurs capitalize on Joel’s 46 years in the speaking business.

“Your life is your choice. That’s it. There are no excuses. It’s up to you. You can’t change people, and you can’t live their life for them. You are where you are today because of the choices you’ve made. And if you don’t like where you are, make different choices. It’s really that simple.”

To learn more about the power of effective speaking, visit ultimatespeaker.com.