Simplicity, and an intense focus on customer satisfaction.

Right now, his company has 278 ratings on Google, with a 5-star total rating. 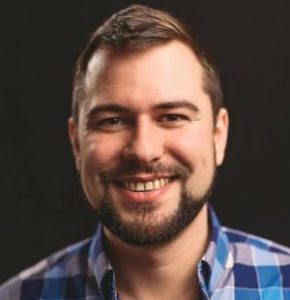 Mark has always had an affinity for creativity and art. He started painting lessons as a child, encouraged by his family.

In his late teens, he stopped because of what he called a “philosophical crisis”: He wanted to be successful and have an impact. At the same time, he struggled to see how he could do that with his art. He felt like “everything had been done”.

So, right after, he became an entrepreneur. He started his first company, and continued with his pressure-washing business right through high school.

Partly thanks to this early introduction to entrepreneurship, Mark later managed to grow his new business, RoofSimple, from $600K to $10M in just four-and-a-half years.

But he also attributes some of the growth to his love for art.

Mark got back into art after realizing that he had a personal need for being creative.

He realized that he didn’t need to use his business as that creative outlet and he didn’t have to use his art to make money.

“If you as an entrepreneur are on the more creative side of the spectrum,” says Mark, “you can get bored easily. You always want to be doing new things. You want to be pioneering new territory.”

But he realized that his roofing business didn’t necessarily need that from him.

“This made me realize that, for my business to succeed, I just had to show up, do a great job and serve my customers.”

He shouldn’t view his business as his “total body of work” or even as “just his”.

“As high-level entrepreneurs, putting too much of ourselves or our egos into our businesses is not always healthy. It can hurt a lot of people who are working for us and putting themselves into it too.”

Mark is adamant that he is now able to pursue what he wants to because of the way he set his business up. As an entrepreneur, you can grow your business and get results without putting in extra hours.

He chooses to focus on discipline over hustle. It is not about how many hours you put in, but about how much you get done.

“There needs to be intellectual honesty about how much you really get done during the day, how efficient you are, and how much you’re not guarding your time with problems or time suckers that could be avoided.”

Spending his time efficiently also allows him time to devote to his art. If he is going to be disciplined about the things he devotes his time to, he says, he needs to make sure it’s all really important things.

Progress and growth are vital to many millennial entrepreneurs. Having an interest outside of your business allows for more personal growth. Your business should not be your only outlet for creativity.

Life doesn’t have to be a constant hustle.

The Right Market and the Right People

In business, Mark says, it’s important to keep things simple. Know what you are offering and who you are serving. Part of the simplicity is keeping the brand very simplified too. Create a solid underlying foundation and make it simple for customers to know what you do.

“With RoofSimple, we found a good thing and learned how to ride the horse. We found the right market and the right people to deliver what we are selling. So what we’ve done right is actually very simple: We’re a growing market. We found a way to lock down certain territories. We’ve developed a good reputation for the work we do. We focus on people because we’re service-oriented.”

Ultimately, it is about taking action, identifying the right thing, figuring out if what you’re doing is working or not, and just repeating that.

Some 7-figure entrepreneurs came up with something new and blazed a trail. Others simply learned to ride the horse.

The business hit some obstacles in the beginning. Despite offering an automated system for delivering quotes within an hour, Mark realized it wasn’t working. The closing rate was terrible.

“We thought not having salespeople, having better rates and automating the process would streamline the business and drive more revenue. The opposite was true.”

They realized that customers want a good salesperson.

“When you’re spending $10,000 – $50,000 on a roof, it’s nice to look somebody in the eye and ask questions about it. It seems risky to just click your mouse when making major purchases.”

And sales doesn’t have to be “sleazy” if it is done by good people and if there is integrity on the service side. Sales always have to be counterbalanced by what you’re delivering.

Mark feels that it’s important to “play with friction” in a business.

Automating quotes was reducing friction by streamlining the process, but it was harming the business.

Sometimes reducing friction is good, sometimes it isn’t. Some things should actually be harder. And the sales process, he feels, is one of those things.

You can’t streamline decision-making without trust. And the best way to gain trust in a business is to have a trustworthy person in front of customers, helping them make informed decisions.

Mark also realized that having someone on-site fielding questions resulted in happier customers.

Customers want that human connection. And your business needs a high percentage of happy customers in order to grow.

But running a business is not just about customer happiness. If the people delivering aren’t happy, fulfilled, and motivated, they can’t provide the best service. It is important that team members are in roles where they are happy and able to thrive based on their unique abilities.

Why Thinking Long-Term Should Be a Core Value for Entrepreneurs

Long-term thinking is important in business.

As your business grows, more opportunities become available. If you don’t have a long-term vision, it can distract you or put you off course to greater things.

It’s easy to take the shiny new carrot or just trade money for a business opportunity. But taking the long-term vision means cultivating long-term relationships and developing credibility in your industry. These are the keys to business growth and sustainability. Communication and trust are always important. Short-term thinking can really hamper your growth.

“Building for the long term is all about identifying the things that will stand the test of time.”

Since many businesses struggle to achieve growth and success, Mark ends with some inspiring words of wisdom for young entrepreneurs:

“Realize that good things are literally one step away all the time. If you have fears about your business failing or whether you have what it takes, remember that no matter how dark it is, the light is only one step in the opposite direction, no matter how far down you are. Take that one step. Once you do, it’s like compound interest. It spirals.”